(This is the section that explains the details of the operation or procedure above and should be read in conjunction with the section Your Back Operation).

A lumbar TDA is performed to remove and replace a damaged disc. The aim of the operation is to remove the entire core of the disc and to replace it with an artificial disc. The reason why the disc is removed is because the disc is thought to be causing local back pain and referred pain into the buttocks, hips and into the thighs. Furthermore, any nerve root compression which may cause your back pain and radicular pain all the way down into the foot can also be addressed with the same operation.

The idea behind replacing the disc that is removed with an artificial disc rather than fusing that level, is to maintain the spinal movement on that specific level. It is believed that fusing a level changes the biomechanics of the adjacent level. In short, it means that the spinal movement (biomechanics) is altered and that this adversely affects the adjacent level, causing premature damage on that level.

The aim with a TDA is to maintain movement of the affected spinal level and to prevent added stress on the discs and joints of the adjacent levels.

When undergoing this operation, you will be lying on your back. Your specialist will make a cut on your belly. This cut can vary from five to ten centimetres (smaller incisions are not possible due to the size of the implant). It can be an up-and-down (vertical) cut or a cut across your belly (horizontal). The position of the cut depends mainly on the level of the spine where your disc is replaced.

When the vertebrae are encountered, the disc is removed totally. At this point, an artificial disc prosthesis is placed in the space. This has do be done carefully under guidance of an X-ray machine to ensure that the prosthetic disc is perfectly positioned. The biggest reason for failed operations is the misplacement of the prosthetic disc. Therefore, the placement is crucial. Following the placement of the prosthesis, the wound is stitched up. 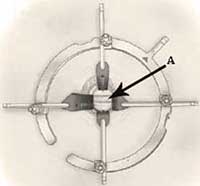 This drawing demonstrates the approach for a lumbar disc arthroplasty. This is a drawing of a patient's stomach (abdomen). Note the ring-like retractor that has been placed on the abdomen to keep the wound open. The structure that can be seen through the opening is the intervertebral disc (A) between two vertebrae. In this case the specialist operated through the abdominal sac (peritoneum) that houses the abdominal organs. In other cases the specialist displaces the peritoneum which contains the abdominal organs to one side and then reaches the spine without penetrating into the cavity (peritoneal cavity). Your specialist then has to displace the major vessels (aorta, iliac artery, vena cava and iliac vein) away from the disc space. Furthermore, the tubes that carry the urine might be in the way and have to be displaced. The sympathetic nervous system that regulates the lymph flow in the legs as well as erection and ejaculation in males and vaginal lubrication in females, can also be violated in the procedure. Your specialist should have appropriate training in performing this approach before embarking on this procedure.

These drawings demonstrate the way your specialist will find the middle of the disc that is being removed. An instrument like this one is used in conjunction with an X-ray machine. It is of critical importance that the middle is accurately marked as the prosthesis will only function correctly if it is placed in the midline. 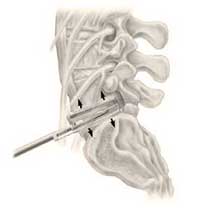 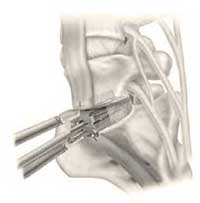 The drawings below demonstrate the artificial disc prosthesis as seen from the side and from the front, after it has been placed in position between the vertebrae where the damaged disc has been removed.

The prosthetic disc has to be placed in the middle of the vertebrae as seen from the front and has to be placed far enough backwards so that the motion of that spine segment is normal, without placing it too deeply. If it is placed to deeply, the prosthesis might push up against the nerves and cause pain or weakness in the leg and if it is too shallow, it may dislodge towards the front. 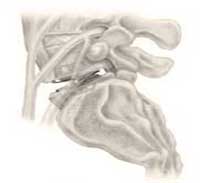 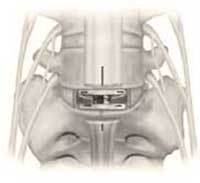 Image used with permission from Medtronic

Ward care
You would be expected to get out of bed quite soon and usually on the first day following surgery or even on the same day. You may normally walk around as much as you want. It is important that you eat and drink nothing until your specialist specifically allows you to.

The reason for this is because of the possibility of your gut being temporarily paralysed from the surgery. This is mostly because of the traction that is placed on it during surgery to keep it out of the way when the specialist operates around the abdominal sac.

Discharge
You would normally be discharged at about five to ten days after surgery, depending on the degree of pain and disability you are experiencing and on the absence of any complicating wound factors or concern about your general health at the time.

The hospital staff will assist you in obtaining your follow-up consultation bookings, the prescribed analgesics to take home, the sick leave-certificate to be provided by your doctor and the instructions regarding wound care provisions in the post-operative period.

Rehabilitation
It is incredibly important to get a lot of rest and exercise following your surgery. Do not try to rush back to work. It is important to walk for exercise and also exercise in conjunction with the guidelines from your physiotherapist. You may perform activities only as prescribed by your specialist. You should refrain from exercises that involve impact for at least six to nine months. This would include jogging, mountain biking, speed boating, water skiing, volleyball, equestrian pursuits and other strenuous activities.

Follow-up
Routinely you will receive a date for your follow-up appointment with your specialist. This may vary from anything between two and six weeks, but you will be seen earlier if there are any complications.

It is important to realise that you will have to protect your back for the rest of your life and apply good back habits (see the section Caring for your Spine).